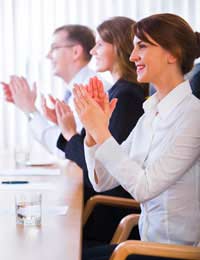 Coming second is always a bitter-sweet moment. You’ve done awfully well – but you didn’t win the prize. Trying to put how you’re feeling into words about that is difficult at the best of times, even if you’re just talking quietly to a friend, but being asked to make a speech can often seem like rubbing salt into the fresh wounds of disappointment.

The runner’s up speech is probably one of the hardest speeches to do well, but it’s worth making the effort for one very important reason; it gives you a final opportunity to shine – and it’s a really good one – so seize it with both hands!

No matter how bad you’re feeling, how frustrated or upset you are about not coming first, a well crafted speech can help you salvage something from your defeat. You may stand up as “the loser” but get it right, and you’ll definitely be sitting down a winner. Here’s how to do it.

1. Set the Right Tone from the Start

The key to this part of the speech is to open well, engage with all of your audience and encourage listeners to want to hear what you have to say.

Example: As you can imagine, ladies and gentlemen, I hadn’t really hoped to be making the runner’s up speech here today/tonight. I was definitively in this to win, so of course I’m disappointed that I didn’t, but I suppose if you are destined to lose, then coming second against this particular group of competitors is quite an honour in itself. Of course I can only congratulate (name of winner/winning team), who as everybody knows, did even better.

2. Speak Well of the Day

OK – you’ve lost; nothing can change that, but you can still make people like you – even your opponents, however grudgingly – if you can show what a generous-spirited individual you are, however cut up you’re feeling about defeat. Talk a little about the contest, the day and what it means to you.

Example: It has been a hard-fought contest, and while I can’t pretend that I’m happy about losing, it has been a privilege to take part – so I’d just like to say a very brief thank you to everyone involved in making it happen. In the end, the result was clear/close/a bit of a surprise, and/but we have a winner – and it wasn’t me. I am reminded of what my old school reports so often used to say all those years ago – and I never realised what good advice it was at the time. “Must try harder”.

This is probably the hardest bit of the speech to get right, but with a bit of care everything will be fine. The trick is to avoid coming over as a bad loser on the one hand, and going too far over-the-top on the other. A lot depends on the type of event or competition and how well you know your opponent, but as a general guide you won’t go far wrong if you remember KISS – keep it short and simple!

Example: That of course, leads me on to (name of winner). She/he has been a great/worthy/interesting opponent and although I’m green with envy at his/her success, I can only offer my congratulations on the victory. Today, ladies and gentlemen, belongs to (name of winner) and you’ve all listened to more than enough from me, so now it’s time for the winner. Thank you.

Well done – now sit down and start thinking about that winner’s speech for next time!

Speech by Someone Seeking Election to Office

Guest Speaker's Speech to Adult Group or Club
Share Your Story, Join the Discussion or Seek Advice..
I need help writing a speech for runner-up ranger of the year (Police Rangers) I don't feel right doing it seeing as it's only runner-up but I've been told I have to, it's due tomorrow?? Please help me!
Nigel - 11-Dec-14 @ 11:53 PM
Title:
(never shown)
Firstname:
(never shown)
Surname:
(never shown)
Email:
(never shown)
Nickname:
(shown)
Comment:
Validate: