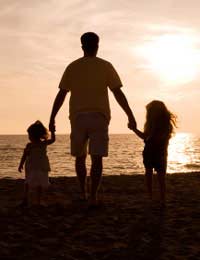 There are few more emotionally important moments in a lifetime than when you lose your father.

It doesn’t matter if you enjoyed a great relationship, or felt you didn’t really see eye to eye on many things – once he’s gone, you’ll realise just how much he meant to you and what a big part he played in your life.

Trying to sum up all the things you’re feeling in a few short sentences and five minutes of time is an impossible task, but the following template may help you gather your thoughts and give you an idea of the sorts of things you might like to say.

1. Introductory Thanks and Comments

You could begin by thanking those who have come and then make a few introductory comments.

Example: I’d really like to thank you for coming today, to support my mother and the rest of the family at this difficult time. It’s so hard to believe that Dad’s gone; he’d always been there – for all of my life – and now suddenly he isn’t anymore and that’s going to take some getting used to.

2. What Your Father Meant To You

Share some of your memories and stories as a way of illustrating what he meant to you.

Example: From as far back as I can remember, I always knew my dad was a great dad, but then I suppose every little kid thinks that! The funny thing was, the older I got, the more certain of it I became. He was a busy man – and he really worked hard – but whenever he could, he’d be there to help you with your homework, fix a broken kite or just sit and listen to what you had to say. He taught me to fish and growing up with three sisters, there was a real sort of “man-thing” about our trips down to the river. I never caught much – but I didn’t mind; I just loved those hours we spent together, when I had him all to myself.

You might like to conclude your eulogy by talking about the lasting influence your father had on his family, friends and others who knew him.

Example: It’s been a long time since we sat on that river-bank together – and fishing wasn’t the only thing I learned from him over the years. He taught us all to take pride in what we did, to always be honest, to celebrate successes – however small – to accept praise graciously and take criticism when it was fair and always to admit it and say sorry, if we were in the wrong. He taught us those things because they mattered to him and my sisters and I have tried to teach those same lessons to our own children, in turn. What was dad like? Look around you – at his friends, his family, the people who knew him – see the impression he made on each of them. That’s what he was like; as Irving Berlin said, “the song is ended, but the melody lingers on.”

They say a boy never entirely grows into a man until he has buried his father – and given the 'specialness' of the bond between a dad and his “little girl”, something similar is probably true for daughters too. Losing a father – who may also be a husband, brother, uncle and granddad as well – is a traumatic event for any family; a well prepared eulogy can be a comfort as much as a tribute and help, even in a small way, to begin to allow everyone to come to terms with the loss.

Eulogy for Grandparent
Share Your Story, Join the Discussion or Seek Advice..
This is so personal that all the rules go out of the window. It's much better to sit down the night before the service, look into your heart and describe what you're feeling, picking out two or three main personality traits in your father and how you came to realise them. It's not easy, that much is quite apparent, but a heartfelt eulogy is the most honest sendoff you can give.
Michael W. - 25-Jun-12 @ 7:00 PM
Title:
(never shown)
Firstname:
(never shown)
Surname:
(never shown)
Email:
(never shown)
Nickname:
(shown)
Comment:
Validate: