Burns Night: Toast to 'the Lassies' 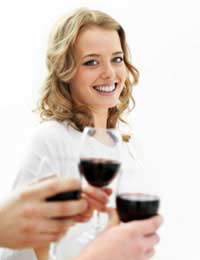 The toast to the lassies is one of the essential speeches at any Burns’ Supper, and along with the lassies’ reply, now performs an important role which adds to the rich theatre of the whole event. Originally principally intended as a “thank you” for cooking the meal, a modern audience looks forward to a witty and amusing speech poking fun – ever so affectionately – at the foibles and idiosyncrasies (real and imagined) of the fairer sex, followed by a robust return of fire when the tables are turned!

Today’s exchange deliberately changes the tone from the earlier and often erudite appreciation of the finer points of Burns’ writing and signals the beginning of a good old Scottish party, so if you’ve been asked to toast the lassies, you’ve a vital part to play. At least a few references to the poet’s work will be expected which is obviously no problem if you’re familiar with it, but if you’re no Burns expert – relax, there are a few “cheats” here to help you.

This is one of the rare occasions in speech writing where you can deliberately set out to cause just the barest touch of mild offence – so enjoy the opportunity. Play to the men in the audience and don’t be afraid to ham it up a bit; ‘the lassies’ are supposed to seethe a bit and look irate – it’s all part of the game!

Example: When I sat down to write this speech, I couldn’t help thinking about how different lads and lassies really are, and not just in all those interesting and rather obvious ways. Take personal grooming, for instance. The average bachelor bathroom contains six items – a toothbrush with rather too few bristles, a tube of toothpaste – squeezed from the middle, naturally – a razor, some shaving crème, a grimy bit of soap and an old grey towel. The lassies – 497 items on average, 492 of which the average man cannot even name, let alone guess what they’re used for. You don’t believe me? Look in (name of hostess) bathroom before you leave; I checked earlier – 502!

Now’s a good time to introduce some of Burns words, and refer to one or two of the (many) lassies in his life as you develop your theme.

Example: And then there’s “the look.” Every man here knows what I mean – but just imagine the one that was waiting for Tam O’Shanter on that fateful night. Here’s our hero on his way home – admittedly stopping off at the pub first, as you do – and while he’s being chased over hill and dale by a bunch of deranged witches and the Devil himself, what’s his Missus up to? Kate’s just sitting there “Gathering her brows like gathering storm, Nursing her wrath, to keep it warm.” You can almost see that foot tapping, can’t you? I mean, it’s not as if Tam got a bit too merry and forgot to tape Eastenders is it? Now that, I am reliably informed by my own dear lady wife, apparently IS a sin – and had she been a better shot with that frying pan, quite possibly a mortal one!

Bear in mind that ‘the toast’ and ‘the reply’ are both supposed to be fairly short speeches – and certainly no longer than ten minutes at most – which makes a good ending very important. Example: So I think we can safely conclude that ‘the lassies’ today are just as difficult for us men to understand as ever they were for Burns – and every bit as lovely! Gentlemen, will you please rise and join me in a toast; to the lassies.

Now sit down and hope the ‘lassie’ who replies is going to be kind!

Making an After Dinner Christmas Speech

Christmas Speech to Family and Friends

Speech to Toast the Chef
Share Your Story, Join the Discussion or Seek Advice..
[Add a Comment]
Hi PhillyB,I would love to see the whole speech as the guy who was going to deliver is now sick and my guests arrive in 30 minutes!help
Rhys - 25-Jan-19 @ 6:58 PM
Great speech - is there a full version available to read?
PompeyROK - 3-Jan-18 @ 7:28 PM
I have just been asked to.step in and deliver the toast to the lassies...Your toast is great and don't want to use my one from 3 yrs ago...Any chance of a full version of yours, please? Thanks!
Tonym - 25-Jan-17 @ 5:28 PM
Where can I see the whole speech above? I like it and would like to use it
Wiggy - 13-Jan-17 @ 9:08 PM
Why do you not have the original Robert Burns speech toaster to the lassie's HELP IS needed BILLYWIZZ
BILLYWIZZ - 9-Nov-16 @ 12:52 AM
I thought you may find some of a toast I did helpful: Mr Chairman, distinguished guests, lassies and laddies, When I was asked to propose the toast to the lassies I was surprised and honoured. I was surprised because, as my accent gives away, I am English and not Scottish. Tonight is one of the most important evenings in the Scottish calendar and to have an Englishman speaking is rare. There is no Scottish in me at all and of course there never has been ... well, apart from a recent prostate examination carried out by Dr Dougal McLargefinger! But that’s a story for another time. And I am honoured to propose this particular toast because the toast to the lassies is one of the most important toasts of the evening, if not The most important, or so I have been constantly reminded by all the ladies present! There are, of course, great differences between men and those of the fairer sex. Since an early age I’ve been scratching my head and trying to work out why we are so different. All to no avail. If anyone could explain the following to me I would indeed be indebted: • why do women always need to go to the lavatory in pairs, Is there a secret bar in there operating a 2 person lane priority system. • why do women spend three hours going to different shops only to return to the very first shop you saw the perfect item in, • and why do you ladies always decline a dessert only to eye up ours and then proclaim “maybe I’ll just have a little bit of yours” before devouring it all. I’m sure I’ll never work it out. As a younger man I thought I would learn more about the different sexes by working behind a bar; but all I saw was men, at the end of the evening, looking into their pint glasses and saying “I love you” to their beer rather than saying it to a nearby lassie. It was at that point I observed some important differences between women and beer. • A beer doesn’t mind if you have beer on your breath • A beer is happy for you to spend all your money on beer • And a beer doesn’t mind if you go off with another beer Unlike me, Robert Burns knew a thing or two about women. In a period of just 11 years he is known to have fathered at least 13 children by at least 5 different women and all without the help of Tinder. Granted he was a Scot and they are known for their way with women but it was quick work indeed for any man. And by all accounts the women were lookers, going by names such as “Handsome Nell” and “Anna with the golden locks.” Burns could not have attained the status he has for so long, were it not for the fact, that he was surrounded by remarkable women. They raised him from the man he was, to be the iconic Scotsman whose poems have rung down the ages. He held them very dear to his heart and looked at them as a source of comfort, a source of inspiration and a source of strength. Although he was incredibly promiscuous he genuinely adored women and his declarations of love are still some of the most famous e
phillyB - 12-Apr-16 @ 9:23 AM
Title:
(never shown)
Firstname:
(never shown)
Surname:
(never shown)
Email:
(never shown)
Nickname:
(shown)
Comment:
Validate: