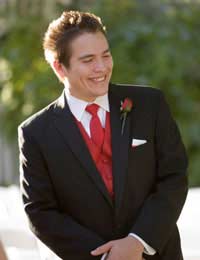 For many a newly-appointed Best Man, of all the important duties of the role, it is the speech which looms largest and most frightening – making any fears of forgetting the rings or leaving the bride’s grandmother behind at the church, pale into insignificance.

Daunting though the task may seem however, it really needn’t be; after all, the guests will be on your side, they’re in the mood to have a good time. Besides, you’re there to support your best friend in one of the most important moments of his life – largely by telling stories about the rest of his life; now how hard can that really be?

There’s no better way to get yourself into a flap over writing your speech than by putting it off, so plan to write it in plenty of time. Don’t forget, although it’s down to you to write and deliver the speech on the day, there’s no rule that says you have to come up with all of the material yourself, so it’s a good idea to pick the brains of the groom’s family and other friends early on for good stories. Mildly embarrassing incidents will be fine, but don’t go for full scale humiliation and keep it clean; there’ll probably be a mix of generations present – so nothing you couldn’t say to a class of kids or your own grandmother, please.

Here is a template which includes an idea of structure, who you should mention and some examples of what you might say:

Introduce the speech with some comments on your role as best man and about the ceremony itself:

Example: Ladies and Gentlemen, it’s a bit ironic that with such lovely bridesmaids the job of replying on their behalf falls to an ugly-looking devil such as myself – but then that’s the great thing about tradition; you don’t have to be beautiful to stand up and make an idiot of yourself. Unfortunately, I think it’s too late to do anything about my looks – as for how much of fool I make of myself, only the next few minutes will tell!”

2. Your Relationship With the Groom

Talk briefly about your friendship with the groom:

Example: I met (groom’s name) on his first day at (work – when he nicked my parking space / school – when I kicked his football through the head teacher’s window ) and there was an instant bond between us – largely due to the fact that we both fancied (Angelina Jolie / ourselves as the new Indiana Jones) and shared a love of (football/stamp collecting/flower arranging).

This is where you tell a few stories about the groom. Remember it's bad form to mention previous girlfriends of the groom unless you've squared it with the bride beforehand!

Example: Life has moved on a bit from that first meeting (number of months/years) ago and we’ve shared lots of experiences – good and bad – since then, getting each other into, and out of, all sorts of scrapes along the way, and I’d like to share just a few of them with you now. I was pretty sure that when (groom’s name) first asked me to be his Best Man, he had forgotten some of the murkier episodes of his past – or hoped that I had. Well, (groom’s name), sorry, but I haven’t – and by the time I’m finished, nor will anybody else!

4. The Bride and Groom's Relationship

Example: So that’s the old (groom’s name); what does his future hold? After all these years hanging around with the likes of me (and a few named friends) he’s actually shown the great good sense to leave it all behind him and grow up! They say that behind every good man, there’s a good woman; you’ll have to draw your own conclusions about (groom’s name) but when it comes to (bride’s name) there’s absolutely no doubt – she’s one in a million – and (groom’s name) is a lucky chap to have found her and even luckier to have got her to say ‘yes’.

Toast the Health of the Bride and Groom

Conclude your speech by getting everyone to stand and raise their glasses in a toast to the health of the bride and groom.

Example: What more can I say? Well, you'll be glad to hear, not much, so will you please join me in wishing them both the very best of luck and happiness for their future together. To Mr and Mrs (name), may your home always be warm, your larder full and all your troubles be little ones! Ladies and gentlemen, the bride and groom!”

Bridesmaids or Matron of Honour Speech