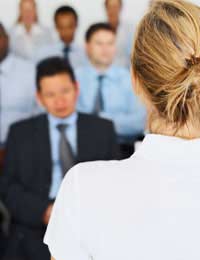 Most audiences are polite and sympathetic, but it’s an unfortunate fact of life that the more speeches you make, sooner or later, you’ll run into a group – or at least a segment of it – that’s determined to be awkward. Whether it’s a work event where bad news has to be delivered, or a social occasion where an embittered ex-boyfriend has had rather too much to drink, a speaker can encounter hostility from the floor. While there’s no denying that it is a challenge to any speaker – even the most polished, experienced and professional – it doesn’t have to be the proverbial kiss of death to a speech. Fortunately, there are techniques that anyone can use to manage even the most awkward of audiences.

Understanding the Balance of Power

The first trick is to understand the balance of power in the speaker/audience relationship. It’s simple; you’re the speaker, you’re in control – or should be – so don’t surrender! A lot of the problems that speakers get into, stem from forgetting that one fact, and allowing the resident pain-in-the-neck to have free rein. Remember, particularly if your ‘awkward element’ comprises a single individual, that the rest of the group are probably as incensed by his/her rudeness as you, so try to relax and remember you have allies who want to hear what you have to say.

What you can do about this largely depends on the type of speech and the nature of the event, but if it’s a questions-from-the-audience type of thing, don’t make a rod for your own back and keep letting her/him monopolise the time available. It’s easy – you’re in charge, so don’t take questions from him/her! You don’t have to be rude, just say something like “that’s an interesting point of view but time is limited, so to be fair to everyone I really ought to take a question from someone else.” The rest of the audience will know what you mean!

Practise and Be Prepared

You can help yourself a lot before you even take the stage by being well prepared and properly rehearsed. Again, much of this depends on the event, but try to find out if there are likely to be any disruptive people amongst your listeners, or any issues that could prove to be contentious ahead of time, and practise dealing with them in the safety of your own kitchen.

The trick here is to avoid turning your presentation into a battleground, so you need to have some well-prepared ways of deflecting any hostility and managing it, so that you can get on with the important business of delivering your speech uninterrupted. It’s obviously important not to get into a verbal slanging-match or see the whole thing as a some kind of conflict or contest.

Example 1: Well, that’s a very interesting point you make, and I appreciate your input, but I wonder if you would mind waiting until the end of my presentation and then we can discuss it further.

Example 2: What is your name, sir? Tom? Well thank you Tom, for your concerns, but I don’t think I can really do justice to them right now. Would it be OK with you if we talked about them later?

By asking for a name, you personalise their involvement and deny them the safe anonymity of the crowd. Smile and nod as you speak encouraging them to go along with your suggestion; human nature being what it is, it takes a really awkward person to continue to behave badly under these circumstances.

Whatever else you do, don’t get angry and don’t ad lib.

If you have done your homework and are properly prepared, you should be able to deal with things without getting all hot under the collar. Make sure you know what you want to say – and how you’re going to deal with that right royal pain-in-the-neck – and just stay true to what you’ve planned. Audiences will always sympathise with a speaker who stays professional and tries to be fair with people; they won’t, however, if you lose your cool and end up in a personalised shouting match.

Very few people can be witty under stress, so unless you pay your bills as a stand-up comic, don’t try to be clever on the hoof. It almost certainly won’t work, and it will most likely go down badly, risking alienating the natural support you have in the rest of the audience. Stay on message and keep to your plan – it’s the best way to deal with difficult people, no matter how awkward they seem determined to be.

The impossible audience is every speaker’s nightmare – but fortunately, it very rarely becomes a reality. Even if you do end up with the worst bunch of listeners in the history of public speaking, if you hold your nerve and keep to a well prepared and thoroughly rehearsed plan, you’ll make it out in one piece!

The Power of Pace and Pauses in a Speech