Home > Techniques > Harness the Power of Rhetoric in Your Speech

Harness the Power of Rhetoric in Your Speech 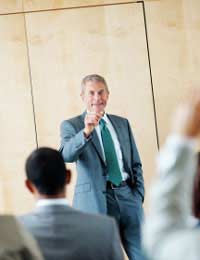 Rhetoric – the art of influencing and persuading people with words – goes back to the days of Socrates and Cicero, and while many of the “rhetorical devices” have unfamiliar names such as anaphora and epistrophe the verbal tricks they represent feature in everything from political speeches to advertising.

To still be in common use after more than two thousand years, it’s pretty clear that rhetoric works, and best of all, you can harness some of its power for your own speeches. In fact the chances are that you’ve been doing it already without even thinking about it. Every time, for example, that you’ve likened one thing to something else – “marriage is like a journey” or “a good friend is a supporting pillar” – you’ve been showing your mastery of similes and metaphors. Just add a few more of the tricks from ancient Greece and you’ll be well away!

Repetition is one of the most effective of all rhetorical devices – we all, for instance, remember Tony Blair’s famous “education, education, education” speech – and it can be used in more ways than simply saying the same thing three times for emphasis.

Try starting phrases in the most important part of your speech by repeating the same few words; it helps to drive home the point you want to make and builds a pattern that people will quickly recognise. It’s also quite rhythmic, which tends to encourage your audience to latch on to what you’re saying and be drawn along with it. This technique is what that word anaphora is all about, if you were wondering – and it certainly did the trick for Winston Churchill. Just look at the number of times he begins “we shall.”

Of course, you can try the same idea at the end of the phrases too, as Barack Obama did, on his way to the Whitehouse, getting eight “Americas” in four phrases:

As you’ve probably already guessed, that’s epistrophe – but the names really don’t matter; the important thing is, the techniques really do work. We all tend to learn by repetition and recognising patterns – harness this rhetorical trick and people will naturally catch on to your message without even trying.

Using the Sound of Speech

If you listen to any of the great motivational speakers, you’ll find yourself being drawn along by their use of words and what can only be described as the “music” of their speech. It is, of course, something which they work hard for years to perfect – but the basics of using the sound of speech for maximum effect are something that anyone can learn very quickly.

Vowel rhyming, or assonance, involves using the same vowel sounds in a number of words in a phrase or sentence – ‘how now brown cow’, for instance, or the Hoover advertising slogan, ‘it beats, as it sweeps, as it cleans’ – and some of the most extreme forms are found in rap lyrics.

“Flash with a rash, gimme my cash flickin’ my ash” (from Gimme Some More by Busta Rhymes).

It’s very easy to overdo assonance, however, so try to restrict yourself to one, or at most two, really good examples in any speech.

Alliteration – adjacent or nearby words that begin with the same letter – is another very useful way to introduce some rhythm. It’s something that politicians very often do in their speeches but it’s also the basis for a number of famous tongue-twisters, so if you do decide to use it, be careful! If you’ve ever tried the one that starts “she sells sea shells on the sea shore”, you’ll know all about the potential pitfalls. Never-the-less, it is a very effective technique, particularly if it’s used along with the final ‘sound’ trick – onomatopoeia, the use of words that sound like the noise they represent. The phrase “the swoosh of swans swooping low” is, for example, both alliterative and onomatopoeic, and instantly paints a verbal picture of the scene you’re describing.

While these simple rhetorical devices can have a really powerful effect in any speech, they do need to be used sparingly, of you can end up either sounding a bit pompous or like you’re doing a bad impression of Martin Luther King or the Prime Minister. The trick is to use them to get your message across without anyone realising the tricks of the speaker’s art that you’re using to do it. Rhetoric is like puppetry; your audience should be caught up in the moment, not concentrating on the strings!